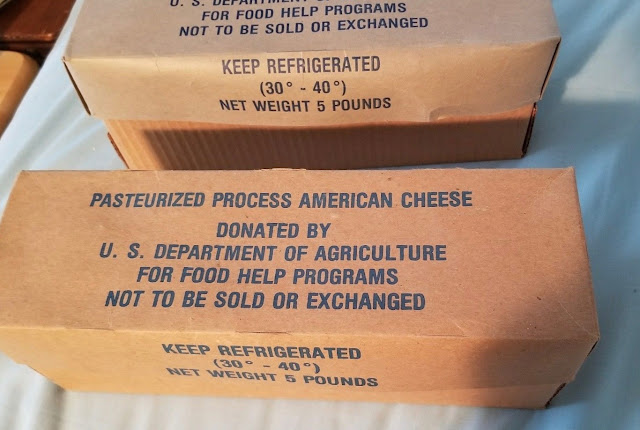 I remember the day my parents came home from town with a bunch of free food from the government. I was 12 years old. It was 1970. There were a couple big bricks of yellow cheese, and powdered milk, and white rice, and some other things I don't recollect. The cheese was pretty good, but the powdered milk wasn't.

The food was for poor people. It was "welfare" food. I didn't like knowing that my parents were poor.

We were poor because my stepfather had experienced a serious health setback.

He didn't look or act sick to me. I saw him as a fit, hard-working Marine veteran. But he wasn't as fit as he looked because he went into the VA hospital for surgery. A couple weeks later he came home a different person. He was so pale and weak and helpless that  only with my mother's help could he get up the four steps into our house. He was only 39 years old. I remember it well. It was a shock to my senses.

My stepfather had been the manager of an industrial laundry in Syracuse, NY. But when he went into the hospital, the company let him go. I don't know exactly how long he was out of work but it was long enough to be an economic hardship. Thus, the government food. 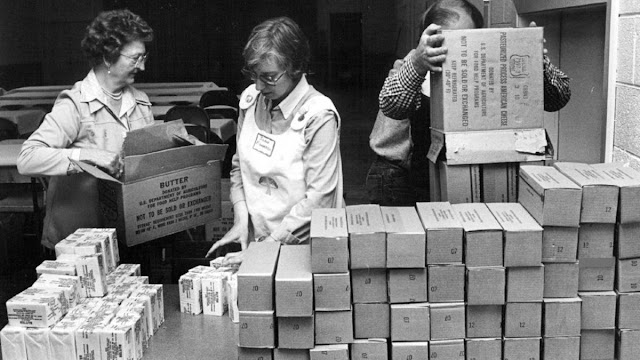 I'm sure my parents didn't like taking that free government food. To my knowledge, they never did again. And I suspect that is how they came to sell Aunt Ruth's stocks.

Aunt Ruth was one of only two living relatives my stepfather had. She was his mother's sister and she lived in California. Aunt Ruth had no children. I met her once, when she came to visit some years earlier. She was a pleasant, white-haired, old lady. Aunt Ruth died a couple years before my stepfather went into the hospital. She left him some stocks in her will.

We started getting mail in big envelopes from different companies. They contained colorful photos and financial details. Marathon Oil and Phelps Dodge were two I remember. They were blue-chip stocks from long-established companies. Aunt Ruth had invested her money wisely.

Back in those times, the daily newspapers had a couple of pages reporting how each and every stock was doing. I was such a nerd back then that I made graphs and charted the daily progress of several stocks.

In time, my stepfather recovered and got back to work. I noticed that the information from the various stock companies stopped coming in the mail. I asked why. My stepfather told me he sold the stocks.

I've always thought that selling those stocks was like selling the seed corn. Between 1970 and 2011 (when my stepfather died) the average annual return on stocks was around 10%. One dollar in the stock market in 1970 grew to be worth around $50 in 2011.

In retrospect, selling Aunt Ruth's stocks might not have been the smartest thing to do, but it was the responsible thing to do. My stepfather had a family to support, and he was down on his luck.

Unfortunately, my stepfather struggled with one serious health crisis after another for the rest of his days. Finances were always tight. My parents were always struggling to keep the bills paid. There were periods of time when the bill collectors called. Our phone service was shut off once for awhile. My parents would manage to save some money, and then another health and financial crisis would come.

My stepfather worked well past retirement age, because he had to. And when he died (my mother had died a few years earlier), his estate amounted to a small amount in a checking account, along with the contents of his house.

That's a sad story, but it's not an uncommon story, and it's not a bad story. In fact, it's actually a good story. That's because my stepfather was a remarkable example of a responsible man. He was a diligent and hard worker who sacrificed for his family. I can't recall him ever wasting money, or spending a lot of money on something special for himself. No boats, no fancy cars, no expensive hobbies, nothing like that—it was all about providing for those he loved. And, at times, I saw my parents being generous towards others with money they really couldn't afford to be generous with.

Life dealt my stepfather one cruel blow after another, but he took the blows and he fought back to the best of his ability. He did the best he could against difficult odds. I admire him greatly for the example he was to me.

That phrase, "selling the seed corn," got me to thinking about the song, The Night They Drove Old Dixie Down. The YouTube video below shows Levon Helm singing the song, while playing the drums.

I can't play a musical instrument, and I can't sing, but Levon Helm can do both at once. It's a fine song and a remarkable performance by a very talented man.

So, anyway, there is a place in that song where Levon sings: "You can't raise the cane back up when it's in the feed."

I always thought those words had something to do with using up the seed corn. But I have recently learned that I have long misheard the lyrics.

He is actually singing: "You can't raise a Caine back up when it's in defeat."

He is referring to Virgil Caine (who served on the Danville Train).

New comments are not allowed.